Eating Disorders as a Worship Disorder

From the medical perspective all eating disorders come with high physical costs. Overeating, starving, binging and purging all wreak havoc on the body’s machinery. Heart problems, brain problems, electrolite problems, teeth problems, intestinal problems and liver problems all occur in part or in total from disordered eating of one kind or another.

From the spiritual perspective all eating disorders are the revelation of a worship disorder. They are an outward sign of an inward spiritual disruption.

Eating disorders are behaviors. These behaviors lead to illness or dis-ease. By the time a person’s eating habits have brought dis-ease or illness they have been at the behavior for a while, long enough to make these behaviors into habits or a new way of life.  It is usually at this stage that family and friends get clued in that something is very wrong with the one who suffers.

Each of the eating disorders have a few things in common from the spiritual perspective:
Fear: The Anorectic has a tremendous fear of man. They fear not measuring up to the standards of other people, or their own standards. The opinion of others is very important to them and part of what drives the behavior is the fear of displeasing them. This places the opinions of self, boy or girlfriend, parents, coaches, or others in the place of God’s opinion over how life is lived.

The Bulimic fears exposure. They do not want their behavior discovered and live in fear of someone hearing them purge or finding their immense stash of food. They fear being fat, going broke and not being able to stop the behavior. Ironically, they also fear not wanting to stop and this leads to a fear of dying from it.

The over eater fears the judgments of other people. Overeating leads to weight gain and despite what you may think, the fat person knows they are fat and they know why. They fear being judged by people they consider to be “normal” weight. They also fear not being able to find clothes that will fit them, or fitting into the ones that they have. The over eater also fears rejection by their spouse because of their size.  So, fear is a common denominator with eating disorders.

Another thing all eating disordered people have in common is in the area of control. The Anorectic believes he or she must have control over every bit of food that is put in their mouth. Every calorie is counted, every piece of lettuce, and sip of water is calculated. She is very in tune with her body and is attempting to control what it needs to function by her will alone.

The bulimic also wants control over her body, and its appearance. She wants to look good, be thin, and still indulge herself. She alone controls what food stays in her system and when she binges and purges. It is a tremendous power trip! No one can effectively stop her from throwing up in her mouth or sticking the toothbrush too far down her throat.

The over eater demonstrates a lack of self-control in a consistent manner. Many will describe a feeling as if something were taking over when they get in the same room with food as though all sense of time and reason has been lost and they are not in control of what or how much goes in their mouth.

There is also a lengthy list of things specific to each of these behaviors that space does not allow me to dive into. This medium is not perfect nor even the best to conduct such a “conversation” and please understand that I am well aware of this.

Also, before the hate mail starts coming and you assume I don’t know what I am talking about let me say that I have struggled with each of these behaviors in my life. In 1988-89 I was “diagnosed” bulimarexic having characteristics of both bulimia and anorexia. I lost 45 pounds within 30 days and I was acutely aware of each of these things I mention above. I also have a tendency to want to over eat and weight issues are not unfamiliar to me.

I have counseled many women with eating disorder behavior and for the most part, these things hold true in almost every case.

That being said, other characteristics common to ALL eating disorders is pride and or idolatry.  Both the anorectic and the bulimic worship their body image or the body image she wishes she had. Each of these behaviors has as a root the mis-belief that “It is my body and I will do with it what I please.” The over eater in particular uses food to meet their perceived needs, medicate emotions, and soothe themselves. Food becomes the means by which “I feel better.”

“I” becomes more important than the Lord or His glory. “I” becomes the one who must be pleased, happy, and satisfied and I daresay glorified. “I” become a functional idolater.

It is with this thought that I leave you today. 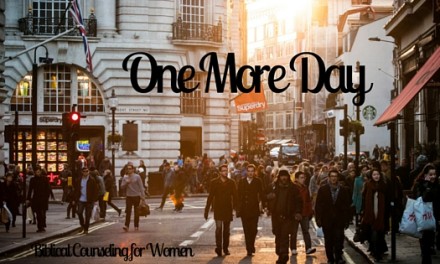 You Can Change Eating Disordered Behavior!