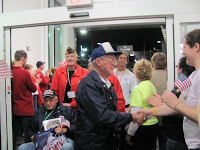 In honor of Memorial Day, I am re-posting something I wrote after my Dad’s Honor Flight to Washington D.C. a little more than a year ago, on his 90th birthday. These men and women are called The Greatest Generation because of their love of country, moral character, and grit.  They enlisted in the military and fought “because it was the right thing to do” (Tom Brokaw, The Greatest Generation). Depending on your source, they say 600-1000 are dying each day. The youngest are now in their 80’s. My dad is in his 90’s and slowly failing.  I imagine one day in the not too distant future I will stand at his graveside and hear Taps and a 21 gun salute.


To all who served and serve today, to all who lost the love of their life, their son, their daughter…Thank You.

We spent this past weekend in Wisconsin. Those trips home involve long hours on the road and many logistical movements. This visit contained more than usual as we had a number of events taking place. 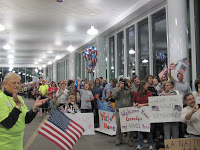 There was the wedding celebration of a cousin and most importantly, the celebration of my dad’s 90th birthday. Added into the mix was a special honor for my Dad.
My Dad is a WWII Veteran (US Navy), and he was selected to go on an Honor Flight (http://www.honorflight.org/) to Washington DC this past Saturday. My husband and I took him to the airport at 4AM and there we saw the remnants of the last great generation I fear this struggling nation will ever see.
As I looked at this aged population of heroes I was overwhelmed by the reality of what we are losing as they pass away. They are men and women of courage and conviction, duty and honor. They came from a time when men were not metrosexual or thought they were trapped in women’s bodies. They were solid, hard core men and proud of it.
Leaving my Dad alone at the drop off point was a little hard. I had not met his guardian for the day and I really wanted to. The Vets were to be treated to breakfast then board the plane for DC. I knew it would be an exciting and full day for him.
When the Vets arrived in DC there was a large crowd of people there with signs and flags, a military band and cheers and many outstretched hands with smiling faces thanking them for their service.  These were all complete strangers to every person who got off that plane. They came just to pay tribute to these Veterans.  My Dad was so overwhelmed and so excited he called us to tell us of their reception! He told me privately that he could hardly see their faces for the tears streaming down his face.
They proceeded to visit each of the war memorials- particularly their memorial, the WWII Memorial, and many other national landmarks in 4 buses  At each stop the guardians got off ahead of them and patiently brought out the wheelchairs and assisted those Vets who were unable to walk or needed help due to their advanced age into those chairs and escorted them around the area.  They were also taken to Arlington National Cemetery, where no doubt many of their friends were laid to rest.  After a long and emotional day, they again boarded the plane for home.
Once the plane took flight, each Veteran was given a packet of letters from home. Their final Mail Call of their military service as it were. These are letters written by the family and friends of the Veteran for them to read on the way back home. My Dad’s contained over 20 letters from his children and grandchildren as well as letters from friends who learned he was going on this trip.
When these American heroes arrived, they were greeted by and Honor Guard of men and women in uniform who lined the way on both sides from the gate through the Security Checkpoint area. At their end began thousands of cheering, applauding, appreciative family, friends, and total strangers who lined the airport walkways turned parade route with balloons and patriotic songs, along with handmade posters welcoming home “Gramps” “PaPa” “Our Hero” and the Brave American Soldiers of WWII. Many of the posters were actual photos of the service man or woman.
The men and women who passed before us on the parade route, many in wheel chairs pushed by their guardians for the day (who paid out of their own pockets for this privilege) were obviously overcome by emotion, openly weeping and shaking their heads in amazement at the crowds and chants of USA! USA! USA! We reached out and shook their hands and thanked them for a job well done many years in the past.
Each time a family spied their Veteran among the group making its way down the parade route, the crowd went wild with cheers and applause for their loved one. We clapped and cheered for these heroes, many of who survived the beaches of Normandy and other horrific battles.
These are the men and women who stopped the evil Axis Powers from spreading fascism across the globe and halted the Third Reich in its tracks. They also defeated Imperial Japan in the Pacific theater. Had they not gone “over there” the world would be a much different place. I am so very proud to say my Dad is one who served.
When we saw my Dad, or rather when he saw us, he burst into a fresh round of tears, for he did not expect every living member of his immediate family to be there to greet him. We cheered and hugged and welcomed home our hero.
Needless to say, the weekend was full and rich and I left overflowing with gratitude to my heavenly Father for giving me such an honorable earthly father, and to my earthly father; Dad, for being my hero and someone I can be proud of.
I love you Dad, Happy 90th Birthday.

A Postscript: The WWII Honor Flights are coming to an end because the Vet’s who are able have all gone on the trip. It is my fondest hope that the tradition will continue for the Korean War Vets and the Vietnam Vet’s.  We must continue to honor those who serve.


PSS: While visiting my Dad a week or so ago he presented his Diary that he kept from the time he entered the Navy. It is a treasure of information about him as a man and a Navy medic in Guadalcanal and the Pacific arena in the war.  Treasures, treasures….

Serving With A Single Mind and A Single Heart

As A Child Under Obedience

The Sinful Heart of Pride