I am the parent of 3 adult sons- this means I have survived 3 teenage boys. To say parenting in this time in
history is difficult is an understatement. We are facing unbelievable obstacles in raising our children to be godly in an
ungodly world. Raising tweens and teens is harder now than at any point in history.

In doing research for a recent presentation I learned that in the ancient biblical culture there was no such
thing as a teenage time of life, there was “child” and “adult.” You learned a trade if you were a boy and you learned to keep the house if you were a girl. You went from your parent’s house to your own house because you married very young. Until child labor laws were enacted in the 1900’s you could get a full-time job at the ripe old age of 13!

Quite a contrast to the teen years that are now largely marked by irresponsibility, isn’t it? As a culture, adults have largely given this age group permission to play a lot and work a little. They have been discouraged from taking this time in life seriously in any way other than doing well in school. Worst of all, teens have been encouraged to make adult decisions without being taught how to think like adults. We have given them a bag of mixed messages and expected them to sort it out using tools they don’t have.

Our teens and tweens are confronted with sexual pressures from all sides. They have Planned Parenthood in their schools giving them the message that they can’t resist their “animal drives” and are expected to have sex. They provide them birth control pills and condoms and take them for abortions when those don’t work. When tweens and teens want to abstain from sexual activity, they are ridiculed. Most teens find it hard to believe there are young men and women who don’t have sex while in junior high and high school.

Tweens and teens also face unrelenting pressure in school to agree with the homosexual agenda. Kids that are brave enough to disagree or voice an opinion are called bigots and narrow-minded. Refusing to condone homosexuality is
seen as a hate crime in public schools. It is clear that it has become socially accepted by the younger generation, many teens just don’t see it as sinful or as a problem for them to embrace this lifestyle.

We are all aware of the pressures on our teens and tweens to be involved with alcohol and drugs. The most recent statistics say the number ONE cause of death for persons aged 15-25 is an alcohol related car crash! Parents need to train their kids not only not to drink and drive, but not to get in a car with someone who has been drinking.  In addition to actually drinking alcohol, kids are inhaling it, bathing their corneas in it, and inserting alcohol suppositories to avoid detection.

It should be clear that the governmental systems that are supposed to be in place to help parents are now more likely to make the parenting job harder! Medical marijuana, the legalization of recreational pot use, and the general mainlining of pot all work against parents who are trying to raise godly kids!

If you want to help your child navigate these tumultuous waters of the tween and teen years, recognize that while sex, drinking, drugs, disrespect, and even clothing choices are problems, they are not the problem. These actions and attitudes are symptoms of the problem which is found in the heart.  You have to understand that like
everyone else, the heart of a teen is fixed on indulging self. What they think about, believe to be true (in any given moment), and desire are almost always described by them as “feelings” and they are what guides and directs their actions.

When there is conflict in the parent-teen relationship the most common way parents deal with it is by commanding the teen to comply with their demands for obedience and submission to authority. This might work for a time, and it may even work long term – on the surface anyway.  I recommend parents ask themselves if they want to develop a person who complies externally but is internally rebellious. Do you just want obedience? That might sound great right now, but there is a long-term problem ahead!

When that is the goal, parents create kids who comply externally but are angry, bitter, resentful and Pharisaical at heart. This is the result of demanding performance out of children of any age without gospel discipline. If you are going to parent your teens biblically you have to teach to the heart. Gospel based discipline is heart centered
discipline.

Even if your teen is unregenerate you should still teach, rebuke, correct, and train
in righteousness at the heart level (2 Tim 3:16).  Change your goals! Rather than making the goal turning out a smart, achiever who goes to college make it your goal to disciple your kids hearts. Teach them what it means to glorify God by how they live their lives and make that your overriding goal too. Everything in your family should be centered around loving God, glorifying God, and loving others, serving others because that glorifies God.

Instead of telling the teens to do this, “Because I said so,” teach them that obedience glorifies God. This kind of teaching and training in righteousness helps the tween and teen to understand that contrary the common teenage belief they are the center of the universe, it is not about them at all. It gives then an “others” focus, even if they don’t want it at first.

Here’s they key though, it has to become a part of your lives too. It has to become your driving motivation and that phrase should really become the hub from which everything else grows. Parenting teens who become godly adults begins with parents who are endeavoring to be godly adults. 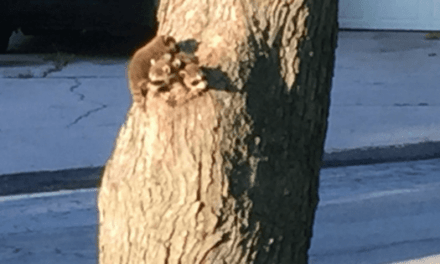 As One Whom His Mother Comforts, So I Will Comfort You 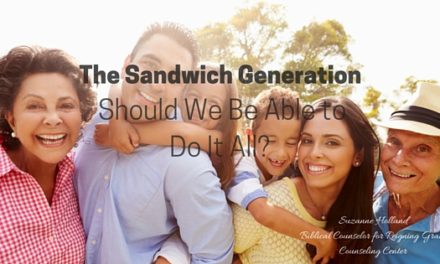 The Sandwich Generation: Should We Be Able to Do It All?

Lies We Tell Ourselves- and Believe