“honor your father…”  Ephesians 6:2a
Spending time with my elderly father has been a mixture of joy and sorrow. I have made some good last memories with him. We’ve taken some scenic drives into the mountains; things I know he has enjoyed. He’s spent time with the friend he came here to see.It is clear he is declining.At 93 what do I expect? I guess I never expected this to happen to him. Because of Age Related Dementia (ARD), he has lost his ability to think clearly and remember things. I am never sure what he remembers. I can’t tell when he is functioning and when he’s not. It seems to be moment to moment sometimes!He wakes up in a frenzy because he’s afraid he’s late for something. Because he can’t hear at all without his hearing aids, it is impossible to reason with him at anything close to a normal volume. When he is wound up, it is not possible to reason with him at all.Sunday morning he was to meet his friend for some activities and he thought he woke up late. He was flying around the room trying to get ready and despite my persuasive abilities he was convinced he was going to miss the meeting time. He insisted on heading down to the breakfast area alone and, since neither I or my husband was dressed all we could do was move fast to catch up with him.How can a 93 year old guy move so fast as to get lost?
But he did. For about 15 eternal minutes he was lost in the outdoor maze of the hotel trying to figure out where the breakfast area was. The things that were going through my mind were endless, and none of them were good. As we scoured the hotel complex several times and he was nowhere to be found, I began to ask total strangers if they’d seen an elderly gentleman who looked lost.By God’s grace, we found him. He was confused and frustrated with himself. There is a part of him that knows what is happening, that he is unable to think and remember the way he used to. He gets angry that he needs help, angry that he can’t think, angry that he can’t be independent enough to get to the lobby alone. Angry at being old.Several times he has said he feels so helpless. I find myself in the position of protecting him with respect. I cannot baby him or order him around. I can’t tell him what to do and yet, I am responsible to ensure his safety and well-being. It involves being creative or frankly, manipulate the situation to maintain respect for him as my father and as an adult yet ensure he is not going to be in harms way.Protect and respect. That’s my goal.

The Stranger In My House

The Heart and Depression 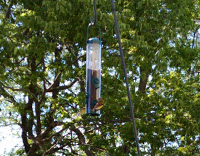 The Sovereignty of God and Special Needs